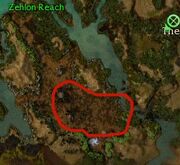 Location to which the children run

Scholar Chago in The Astralarium

"While you were gone, three of the village children snuck up on me and stole some of the spores off one of my work tables! They mean it to be a joke, but they don't realize what they've taken. Who knows what could happen if they do anything dangerous with one of those spores! Please, go to Zehlon Reach and get the spores back from the children before one of them gets hurt!"

Accept: "You got it!"
Reject: "Eh, talk to their parents. Those kids need a spanking."
When asked about quest: "Quickly, to Zehlon Reach before it's too late!

Adina: "These things are cool! Look at how sticky they are!"
Paldinam: "They're all wrinkled. Ewwwww!"
Nehduvad: "It's that strange traveler! Run awaaaaay!!"

"Aww, you caught me. What? Oh, you want this sticky ball? Okay."

"No fair! Youuuu cheated! You want this little round thing? Well, all right. I was bored with it anyway."

"You caught me, you meanie! What, this shiny rock? All right, I'll give it back if I have to. Just don't tell the others you caught me!"

"Ah, excellent. Excellent! I knew I could count on you. None of the children were hurt, I trust?"

All three children can be found in Zehlon Reach, just outside of the Astralarium. They will discuss the spores, and upon noticing you, run off. Be prepared to chase them, as they will start running towards the exit to Cliffs of Dohjok. This quest can easily be completed, even by yourself. If you have any skills which can give you speed buffs to increase your movement speed in explorable areas, bring them to make things easier. If your character doesn't have any, consider equipping a hero with one. Even if you don't have any speed buffs, the quest can still be completed, you just might have to chase them around a bit more.

Immediately after they complete their dialogue, talk with the northern-most child first, and quickly chase after the other two. This shouldn't pose any problems, however if they manage to escape, you can either just rezone or just let them go. The children will end up running around in the field north of the portal to the Cliffs of Dohjok, (but they don't actually leave), so you can always just catch them there. There are some medium-level bosses nearby, including Rahti, Flower of Dread, while the kids will not be attacked by the monsters, the better approach for lower level characters is to catch up to them ASAP rather than contend with the monsters and bosses in that field.