Warning: The following text contains spoilers relating to the plot of Nightfall Campaign.

Abaddon is a dark fallen god that was outcast by the Gods of Tyria long ago and exiled to the Realm of Torment. He was formerly the God of Water and Knowledge and known to the Order of the Whispers as the God of Secrets.

The Casting Out of Abaddon[edit | edit source]

Abaddon was formerly the God of Water and Knowledge. When the gods gave the sentient races of Tyria the gift of magic, it was Abaddon who represented the gods and handled the actual distribution. However, Abaddon gave out this gift a little too freely and indiscriminately, which fueled the greed that caused the sentient races to abuse it and wage massive wars against each other.

King Doric went to the land of Arah and begged the other gods to bring peace to the world. Against the opposition of Abaddon, the other five gods created the Bloodstones to split up the four schools of magic, which would suppress its abuse.

Abaddon was angered by this and he gathered his strongest followers, the demon Margonites, to assault the weak spot of the Rift so he could overthrow the other five gods. Although Abaddon was strong enough to defeat the joint forces of two gods, he still could not withstand the power of all five gods united. In the end he was defeated and imprisoned in the Realm of Torment, never to interfere with worldly matters again. The site of that great battle is now known as the the Mouth of Torment.

After the war, the five gods erased all mention of Abaddon and his deeds from monuments and historical records. Curiously, there is still a location named Abaddon's Mouth and a copy of the Scriptures of Abaddon remaining in existence. The only logical reason for that is that Abaddon's followers had managed to hide some of their God's records away from the five gods.

The Scriptures of Abaddon[edit | edit source] 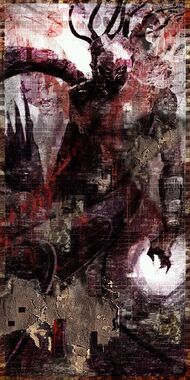 Mural of Abaddon in Gandara, the Moon Fortress

This excerpt from the Scriptures of Abaddon can be found as an inscription on the empty Statue pedestal of Abaddon in the Gate of Madness mission:

Another section of the Scriptures is revealed in the Guild Wars Nightfall manual: 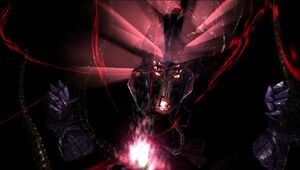 In the final mission of the Nightfall campaign, Abaddon is defeated, and begins to collapse. Kormir, using the gift granted to her by the avatars, absorbs his power and knowledge and becomes the Goddess of Truth.

Olias makes the following statement in Throne of Secrets

"Abaddon is dead. And I assure you, Grenth will not make the mistake that the other gods did. We will not hear from Abaddon again in this lifetime... or the next."

However, considering Dhuum's current status, this statement is suspect.