Arbor Bay is the first Explorable area of the Tarnished Coast that anyone coming in through the Vloxen Excavations tunnel from the Verdant Cascades will see. It is very large, and mostly composed of the bay that it is named for, which is shallow enough to wade in. There are also some coastal land, which is quite wide in the east, and a large cave in the Northwest, which has some ruins in it that some Asura have planned to settle. These plans, however, may be doomed to failure, due to the Pale Tree that Ventari and Ronan have planted in the wide lake in the shadowy southwest of the Bay. 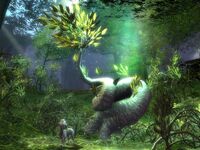