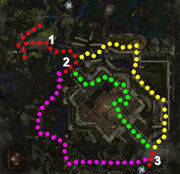 Retrieve the sacred Urn of Saint Viktor and deliver it to Mhenlo.

1 You can only earn the faction reward the first time you complete the mission at a certain level in either mode, you will not earn faction for completing it in the other mode.

Follow the road to the rear gate of zu Heltzer Cathedral (point "1" on the map). You will find mixed groups of Wardens in this area. Some of the giant mushrooms emit Stone Spores.

After a short dialog, Danika will open the gate, allowing the party into the cathedral. In order to be able to pick up the Urn of Saint Viktor (point "2" on the map), you first have to defeat five groups of Warden. Two will await you in the water at the bottom of the stairs, both groups will attack you as soon as you enter the water (if you attack fast enough, it is possible to wipe out one group before the other comes within aggro range). Two more groups guard the stairs leading upward to the main cathedral. Those four groups are easily defeated, as they consist only of warriors and rangers, but the fifth group, on top of the stairs, will include two Warden of Earth, two ritualists and a boss (either Ryver Mossplanter or Milefaun Mindflayer). Take heed not to accidentally aggro it while fighting one of the groups on the stairs.

After you pick up the urn, a cinematic will play and Mhenlo will be trapped outside the building, leaving the party and Danika to escape through the collapsing cathedral. Note that if you skip the cinematic you may have to wait for Danika to catch up with you.

The urn is charged through damage received by its bearer. When dropped, the urn summons Viktor to protect your party, creating a blue shield effect. Characters under this Shield are enchanted with the Shield of Saint Viktor. Note that Heroes are not affected.

Progression and division of the Shield of Saint Viktor

If you drop the urn and do not pick it up again rather quickly, Danika will soon start to complain: "Hey, this urn is one of my family's most prized possessions. You can't just leave it here unattended!" She will not venture far from where the urn was dropped until it is picked up and carried again. It is therefore essential, when fleeing from a near-wipe situation, to ensure that someone picks up the urn. Otherwise Danika will not follow and will be killed.

Even if you do pick up the urn, Danika sometimes gets stuck and does not follow. You may have to backtrack to return to Danika and get her to follow you.

From now on, fragments of the building fall at a regular rate, causing minor damage to the whole party and interrupting skills and attacks. Fast Casting, and skills that prevent interruption, like Mantra of Concentration, Tranquil Was Tanasen, and Glyph of Concentration are recommended for members who are carrying resurrect spells. Mantra of Resolve may also help, but will be very costly if it is active in the wrong places (see below). In general it is recommended for spell casters to focus on spells with a relatively short activation time when preparing for this mission.

Several areas of the cathedral have the environmental effect "Cathedral Collapse", in which the above described effect will occur more frequently. (This is why Mantra of Resolve may be too expensive.) You should avoid fighting in those areas whenever possible, especially when venturing with henchmen. If party members should die in such an area, henchmen healers will often be unable to resurrect them, as they are unable to time their spells right so that they are not interrupted. The cathedral collapse zones become more frequent as you venture further into the mission, regardless of which route you take.

The party will be back at the stairs where they entered the cathedral. A group of Stone Rains and Stone Reapers will spawn in the water below. Focus on dispatching the Stone Rains quickly, as they are capable of massive damage dealing, should they gang up on one character.

There are three routes from the cathedral sanctum to the atrium and exit (point "3" on the map):

The southernmost route (purple path on the map) has mostly Dredge. One run through found a total of 37 dredge (including 4 Dredge Gardeners), 9 Oni, 5 Blood Drinkers, 1 Fungal Wallow, and the boss Dark Fang. Dredge can come in groups as large as seven and include a healer, making this route probably the hardest of the three. Pulling issues mainly stem from getting enemies out of cathedral collapse zones, and not running past invisible Oni to aggro an extra group while fighting the Oni.

The northern route (yellow path on the map) has mainly Undergrowths, but also quite a few Stone Scale Kirins and Oni. One run through found a total of 26 Undergrowths, 18 Oni, 9 Kirin, 3 Dragon Moss, 2 Stone Guardians, and the boss The Ancient. The kirin wander considerable distances, so a party must pull groups of enemies apart carefully. Most of the Oni are near the end of the route, where the cathedral collapse zones are common. This route has no healers, but the most enemies, making it probably the longest. The only groups of more than four enemies are those of 5-6 Undergrowths.

The center route (green path on the map) is populated primarily with Wardens. One run through found a total of 31 wardens, 4 Stone Guardians, and 6 Oni. Among the wardens were three healers, but none of the dangerous Wardens of Earth. The center route is probably the shortest and the easiest. The trickiest part to pull is at the bottom of the stairs. If pulled properly, a party should never have to fight more than five enemies at a time on this route. Be sure to get out of the densely arranged cathedral collapse zones when fighting the Oni at the end.

As soon as you reach the atrium, several Stone Rains, two Stone Reapers and one Stone Soul will come alive and gather around the boss Stone Judge. You should try to intercept and take down one or two of the Stone Rains spawning next to you before they can join the group, as this will make the following fight reasonably easier.

Eliminate the regular enemies before the boss. Have someone tank the Stone Judge during this fight or otherwise debilitate him, as his attacks can be devastating. As soon as the Stone Judge is eliminated, Danika will start the ritual to open the door. Two Stone Crushers will awaken next to the door. Prevent them from attacking Danika, as their attacks will interrupt her ritual. As soon as the door is open, Danika will leave and a cinematic will show the end of the mission. It is not necessary to have killed the Stone Crushers or even to carry the urn out of the cathedral.

Hint: Don't forget to use the Urn of Saint Viktor for protection. Put a caster on "urn duty" and keep dropping the urn around Danika et al. Remember to pick up the urn after each fight, as Danika will not follow the party while the urn is on the ground.

Hint: Try to keep Stone Judge alive as long as possible - preferably until all other enemies are eliminated. This way, you keep Danika in action (healing your party and, more important, herself). After the boss is defeated, Danika will start her ritual - which will be interrupted when there are enemies around. Also, if you have dispatched all of the enemies before killing the Judge, the ritual is often completed before the additional Stone Crushers join the fight, thus saving you additional time to achieve Master's reward.

The allowed 30 mintues is plenty of time to easily get master's reward, even if you lose several minutes on Danika getting lost, having to recover from a near-wipe, etc.

The time limit of 30 minutes for master's reward is not increased in hard mode, so there is significant time pressure. In particular, watch Danika to make sure she comes with your group, as she sometimes gets stuck or lost, and you may have to waste a couple minutes to go back for her.

Between Splinter Weapon, Energy Surge, Shatter Hex, and Cry of Frustration, the Wardens have quite a bit of multi-target damage, so it helps to spread out a bit. If going with henchmen and heroes, flagging henchmen at one spot and heroes at a different spot is usually sufficient.

The wardens come in small groups, but are linked in non-obvious ways, so if you pull two far in front, they're likely to be in two separate groups, and thus bring two groups. It helps to pull some enemies up the big ramp outside the cathedral to separate them.

Make sure the other four groups are cleared before attempting the boss group, as sometimes a group of wardens left standing will chase all the way across the room to attack you while you fight the boss group. The first boss is accompanied by two Wardens of Earth that can wipe your group in a hurry with Churning Earth if you don't spread out. Flag heroes and henchmen apart for the battle, and pull the boss group some. Pulling and running away tends to leave Danika and Mhenlo in front of your group, which can be useful, as they're the most capable tanks you have.

Take the center route after getting the urn, and make sure Danika is with you when you head out, as she takes her time shortly after the cut scene. The center route has arguably the easiest enemies and certainly the fewest.

Be very careful about pulling in the area where you head down the stairs into the center. You may need to go well ahead of your group and pull enemies back to you. Flag your party at the top of the stairs for a while, both for a height advantage, and to keep them out of the collapse zone.

The fast way to do the ending sequence is to flag your party to the west and aggro the Stone Judge. The boss will chase further than other enemies, making it possible to kill the boss first. When the boss dies, rush over to the door and draw fire away from Danika. Spread out your party to avoid being slaughtered by the Stone Rains' Shockwave. Usually Danika will open the door after 10 seconds, completing the mission, even if your party is in the process of wiping. Sometimes Danika will refuse to open the door until most of the stone guardians are dead, which can lead to a wipe if the boss is the only enemies dead before Danika rushes over to the door.

If you have a lot of time left at the end, it can be safer to do the ending sequence by killing some other stone guardians before the boss, so that you don't get overwhelmed if Danika refuses to open the door. Killing the boss makes two additional Stone Crushers spawn, but this is quite manageable if a few of the other stone guardians are already dead.