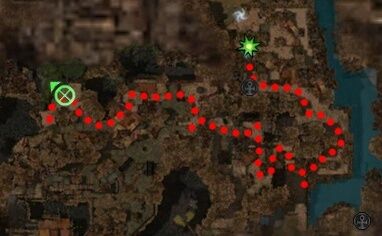 You've done well. With the information you've gathered, we know that we're searching for someone named Jeijou, and that he is likely in Nahpui Quarter, by way of Senji's Corner. We don't know yet what the connection is between hiim and the Am Fah's movements, but that they are related at all tells me much. This is a threat to the people of Cantha, and it must be dealt with before any harm comes of it.

Accept: We must act quickly!
Reject: Actually, I'm pretty sure it's no big deal.
When asked about quest: The information you've gathered says our next move is to go to Nahpui Quarter, through Senji's Corner.

Intermediate Dialogue 1 (when you reach the first quest marker)

Xan Hei: Whatever the Am Fah have planned, it stops here and now. Cantha has suffered their presence for far too long.

Intermediate Dialogue 2 (when you reach the second quest marker)

Xan Hei: The Am Fah have helped to spread the plague. To me, that makes them no better than the Afflicted they've brought down upon us.

Intermediate Dialogue 3 (when you find Jeijou)

Xan Hei: This was a better death than you deserved. But never fear, we'll soon be sending all of your ilk to join you.
<player character>: Don't you think that's taking it too far? They're still people. There's a chance they can be brought around.
Xan Hei: What is the difference between evil and those who practice evil? Before you question me, ask yourself this: how many countless lives have you taken in the name of doing what was right?

We've sent a powerful message to the Am Fah this day. Their stranglehold on our streets, our city, is coming to an end. The people will no longer live in fear, and they are going to take their homes back with their own hands. With this victory, it is assured that more people will hear the call of our cause. Justice is on our side, and we have the momentum. We must continue to take the fight to the Am Fah and the Jade Brotherhood, for the sake of a stronger Cantha!

The Gangs of Kaineng
Architect of Corruption (Hard mode)

Make sure you are prepared, before you leave from Shenji's Corner. There will be many fights, with large groups of Am Fah. Pull when you have the chance, to split the largest groups. Because you only have to kill Jeijou, you can map out once he's dead even if the rest of the final groups are not.