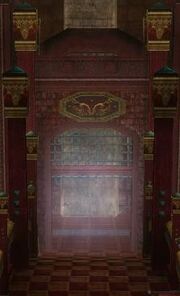 These are often referred to as "portals".

On the world map, area boundaries are marked as small white/bluish vortexes.

These mark where you can move from one zone to another. An area boundary is represented by a glimmering curtain of bluish-white light in Prophecies and Factions, and as a thick ring of golden light in Nightfall and Eye of the North. Through the portal you can see the adjacent area. Walking through this curtain results in the next zone being loaded.

The following mechanics exist with regards to passing through a portal: