Area of Effect (AoE) skills affect a given area of the playfield, and not any one specific enemy; any enemy inside of the area will be affected by the skill. The affected area does not move over time, so aware players can move elsewhere to avoid the negative effects caused by the skill. In PvE play, however, they are more useful, because computer-controlled players tend to stay where they are, especially when they have some kind of ranged attack. In PvP play, use such skills to clear a tactically important area of opponents so your team can take and exploit such a breach in the opposing team's defense.

Most AoEs require a target; however, some will take effect around the caster. This are called PBAoEs—point-blank area of effect. 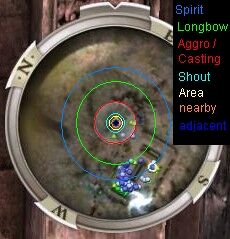 To tell how large the AoE of a certain spell is, check the skill description wording and compare the range to the aggro circle:

Note: Ranges on the minimap are approximate as the distances are measured 3-dimensional, whereas the map is 2-dimensional. Furthermore user tests have shown that ranges often differ depending on the used skill.