Arkjok Ward is an explorable area in Kourna. The western half of it is open savannah, inhabited by the various wildlife of the region, especially in the Northwest, where there is a watering hole. Further to the east, on the banks of the river Elon, the area is irrigated, and there are farming villages. The southeastern-most part of the Ward is located on part of the delta of the Elon, where the Kournan military maintains a fortress. Presumably the strategic value of this location is that it protects or controls the farming villages or to control the bridges that allow access to to Pogahn Passage from the west, or all three. 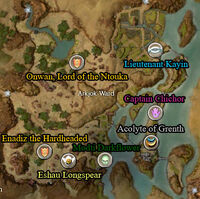