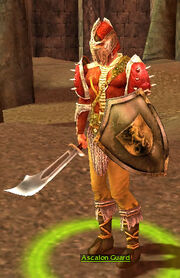 An Ascalon Guard, a typical soldier of the Ascalon Army

The Ascalon Army is the weapon and the shield of the Kingdom of Ascalon.

A long time ago, the army fought in the Guild Wars against the other human kingdoms of Tyria: Kryta and Orr. But lately (especially since the Searing) the Charr have taken over as the main enemy of Ascalon.

Soldiers typically wear a red armor (as shown to the right) and wield various weapons. Some members of the Ascalon Vanguard wear dark grey armor.

The Ascalon Academy in Ascalon City is the main training facility of the Ascalon Army.

Both women and men are accepted as recruits into the army. Anyone who is skilled at using a weapon to defend Ascalon against the Charr is welcome.

The Army has the following known divisions:

The following types of soldiers serve in the Ascalon Army: