Assault on the Stronghold 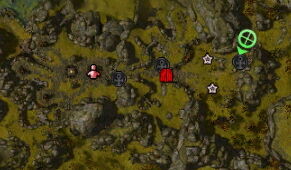 Automatically added upon completing What Must Be Done
After first completion, can be obtained from:

What Must Be Done

Speak to Roan Fierceheart outside Doomlore Shrine to initiate the quest. You will be transported to Sacnoth Valley.

The first stage of this quest involves capturing a pair of Siege Devourers and using them to take out Charr Seekers on the walls of the stronghold so that the Armored Saurus can move up to the gate and break it down. The siege devourers are guarded by enemy Charr to begin with. Pyre's warband will capture the north devourer and leave your party to capture the south.

Once you clear both groups, you'll take control of the siege devourers, which will commence firing upon the fortress. There are four groups of seekers defending the gate: each side has one group right by the gate and one that comes up a little further. You can set the siege devourers to target either group of Charr on its side and it will destroy the Charr there. The Charr seekers will slowly respawn up to 4 in each group.

Once the siege devourers are up, trios of Charr warriors will spawn below the bluff and attempt to kill the devourers, while the seekers on top will respawn continuously. If they destroy a devourer, it stops firing, but if you clear all the enemy Charr from around a siege devourer, it will repair and resume firing. At most two trios of Charr will attack each devourer at a time, though if you wipe out one group, another will spawn to replace it.

Shortly after the siege devourers are repaired, the armored saurus will come to attack the gate. It will slowly meander right up the middle toward the gate, and once it gets there, hack away until either the saurus dies or the gate is destroyed. If the saurus dies, it will respawn behind the devourers after a few seconds. Once the gate is destroyed, enemy Charr will no longer respawn. You can clear any remaining Charr in the area and then move on.

There are a number of ways to clear this initial part. Perhaps the simplest is to let Pyre's warband take and hold the north siege devourer while letting your group defend the south one. One player can run back and forth between the devourers toggling them between attacking the bluff and the gate, to ensure that at any given time, the bulk of the Charr seekers are dead. This will let the saurus have ample time to hack away at the gate and do considerable damage before dying. It will take a few sauri to take down the gate and allow you to move on. This makes it wholly unnecessary for the party to come within range of the seekers or for the player to do any fighting in this phase.

An alternative method to get past the gate is for one player in the party to use Consume Corpse or Necrotic Traversal on one of the Charr Seekers' corpses on the bluffs. The player can then head west to activate the resurrection shrine. Have everyone in the party die, and you will be resurrected at the shrine without having to break down the gate.

After the gate is down, clean up any leftover warriors and seekers before moving into the stronghold. A mass of Charr awaits you, but they will retreat when you enter the gate. Take out the few groups of Charr left in the outer area before moving into the central area. If the saurus is still alive, it will move up to the base of the stairs, and can provide additional support at this point.

After the area is cleared of both Charr and destroyers, a cutscene will play, and the party will appear in Grothmar Wardowns just outside Longeye's Ledge.

Pyre's warband will need your help to take and hold the north siege devourer. Once the devourers are up and the saurus comes, it's easy to get overwhelmed by the oncoming Charr if you try to defend both devourers at once. It is much easier to stay with Pyre's warband and defend only the north devourer. This won't let you kill very many of the Charr seekers, however, which gets the armored saurus killed.

One solution is to have a protection monk cast Life Barrier on the saurus as it passes, immediately followed by Life Bond. If the skills are on a hero, disable them and cast them manually when the saurus comes. You may need to fight somewhat to the west of the north devourer in order to keep the saurus near enough to not remove the bonds for reasons of distance when it reaches the gate. Keep your party out of range both of the Charr seekers and the warriors that attack the southern devourer, and it is easy to hold the north devourer with the help of Pyre's warband. If bonded, the first saurus should take down the gate on its own.

When the Charr and destroyers fight each other at the end, hard mode doesn't affect the destroyers very much, but it makes the Charr vastly stronger, so they rout the destroyers. As such, the end battle will entail clearing several groups of Charr, and possibly a couple of destroyers that managed to get out of the Charr patrol routes.

There are five groups of Charr at the end: two on each side of the central pit that patrol small triangular routes, and Hierophant Burntsoul's group, which wanders back and forth between the two sides. The two groups nearest to the stairs are typically greatly thinned by destroyers, and easily finished off. The other group that stays north of the pit is handily destroyed if pulled to the top of the stairs. Wait to pull it until the boss group has just left, so that you'll have a lot of time before it returns.

The other group of Charr that stays south of the pit often has a Charr Avenger or two that can heal and resurrect, making the group far more difficult. Unless this group has been thinned by destroyers, it is typically easier to kill the boss group first. Set up in the path of the boss group on the north side of the pit and the other remaining group of Charr will stay out of your way, giving you as much time as you need. Use flags to spread your party out, as the boss will use Fire Storm and Meteor Shower. This allows you to take as much time as needed to kill the final group without interference from the boss group.