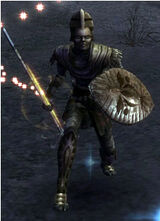 An Awakened Cavalier, a typical Awakened.

The Awakened are the undead forces that swarm the Desolation in Elona. They were once the dead remains of the great armies from Elona's past. Namely, the era of the Primeval Kings. However, Palawa Joko used his magic to animate hordes and hordes of these creatures and used them to attempt to invade Elona.

After his defeat, the Awakened fell into disrepair. Some of the Awakened became pawns as Joko's generals fought for control of his army while others simply roamed the Desolation in an eternal state of unrest.

Awakened tend to make heavy use of resurrection skills. Both the Awakened Cavalier and Awakened Acolytes have some form of resurrection ability. The Acolytes have Renew Life, and the Cavaliers have both Signet of Return and "We Shall Return!", a AoE rez shout. This will create the impression that the Awakened, in true undead fashion, refuse to remain dead. If these two creatures are not killed quickly one will find oneself fighting the same undead over and over again. Awakened are also notable for heavy use of anti-paragon hexes, notably Vocal Minority.