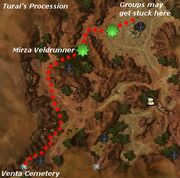 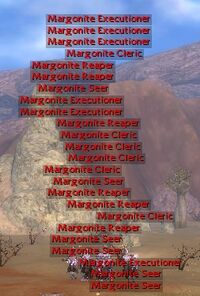 A sample horde from the quest.

"[Difficulty: Master] Our scouts have spotted a large army of nightmare creatures from the north. We must stand and fight! Join me, heroes, and show these demons they have underestimated the Veldrunner pride! Follow me to the front lines!"

Mirza Veldrunner: "Charge! Take them down with speed, my brothers!"

Mirza Veldrunner: "The enemy approaches! Show them the strength of our ancestors!"
<Veldrunner Fighters>: "For the pride!"

"What a glorious battle, indeed. You fight well for one with so few feet, <name>.

We have little to offer you in return, but we shall grant you a great honor. Our young will sing ballads of your greatness, and your names will be remembered by our people through the darkest of the nights. Go, <name>, and see us through to daylight."

When you get to the quest way point, you will see the Centaurs in a wedge formation and your group expected to be at the tip. The Centaur allies are all trappers. Unfortunately the sheer numbers of the incoming Margonites will be overwhelming. Therefore, before getting to the way point, make sure to activate the nearest Resurrection Shrine because party wipes are quite possible, and do not really affect the outcome. Do not be discouraged by wipes, this quest can be and has been done with everyone at 60% death penalty.

One possible way to overcome the seemingly impossible odds is to separate the groups:

At the end of the quest, a necromancer Margonite boss, named Torment Weaver, will come along with a final group. Kill them to finish the quest.

As soon as the quest log tells: "Stand your ground against the horde of nightmare creatures" run to the far right. You will see aproaching groups. Let the left groups kill centaurs. Focus on killing the groups on the right. As you kill the first wave, the next will appear - kill it. After killing the last wave, wait a while to regen. Capture the rez shrine and go face the groups where the centaurs were killed. Kill this group and immediately run to the right side of the cliff. Regen there and go back to the fight spot. After these waves run back to regen point. The one wave will approach from there. After defeating it, deal with the one wave in the death point. Go back to regen point and wait for the group with boss. Ambush these, and the quest is complete.

A monk hero and whatever henchmen, or another person with more ranger heroes can fill out the party.

Disable all the rangers heroes skills using shift-click then talk to Mirza Veldrunner to start the quest. Flag Heroes/Henchmen on the hill and follow Mirza Veldrunner to trigger the quest then quickly run back to your team and wait for the Centaurs to die. Walk down until you are just out of aggro of the mob and flag your rangers to stand by you. Have them cast EW and QZ then use Trapper's Speed and cast all the traps twice. Send the rangers part way up the hill and have them cast EoE and Brambles. Send the rangers back to stand in safety with the rest of your party then pull the Margonites with a wand across the traps. Repeat until they are all dead and for all the waves. After you get the quest completion message zone away and then return to Mirza Veldrunner for your reward.

If you are an Elementalist, a setup of Searing Flames, Glowing Gaze, Glyph of Lesser Energy, Fire Attunement, Glyph of Sacrifice, and Meteor Shower works well with Protective Spirit and Rebirth with 8 Protection Prayers. Cast PS before pulling and use Glyph of Sacrifice and Meteor Shower followed by Searing Flames and Glowing Gaze when the Margonites hit the traps to make sure they all die. PS is a good idea for any profession as it will protect against spike damage while you pull.

If you die pulling, wait for the Margonites to return to their position and flag a hero with Rebirth to resurrect you.

When only a few remain, call the rest of your party to finish them off, beware of the next wave that comes and be sure to leave the area before they arrive. Keep your trappers out of the fight as they don't have any bow skills and in case they need to rez.