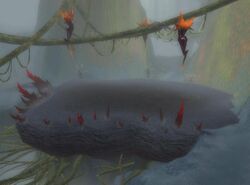 A bloodstone is one of five stones that control magic in the world of Tyria.

The Gods gathered all the magic from all the races into one tall stone and smashed it into five parts. Four of them were named Stones of Magic, each representing one school of magic: Preservation, Destruction, Aggression and Denial. The fifth stone was required to reassemble the other four, called the Keystone. The bloodstones prevent any one person from controlling all types of magic.

Following that, the Gods sealed the stones with the blood of King Doric (hence the name bloodstones) and placed him and his dynasty in charge of guarding these stones. The stones were dropped into Abaddon's Mouth, the great volcano in the Ring of Fire Islands. Content that the stones were sealed away, the Gods left Tyria that same year, which became known as the year of the Exodus.

Over a hundred years later, however, the volcano erupted, spewing forth the bloodstones back into the world and prompting a regression to the feudal ways of old.

In the current world of Guild Wars, the locations of the following Bloodstones are known:

At the end of the Dragon's Lair mission Glint says that there is a bloodstone in the Shiverpeaks which the White Mantle planned to sacrifice Evennia and Saidra on. This is referring to the bloodstone within Bloodstone Caves, the dungeon at the foot of the Southern Shiverpeaks, near the coast, in Sparkfly Swamp west of Droknar's Forge.