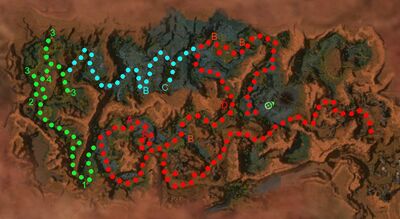 Seek the truth about the White Mantle.

The White Mantle activate the Bloodstone

To get through this mission, you will need to collect Vine Seeds from Vine Seed Flowers in order to create Vine Bridges through the jungle. Groups of three vine seed flowers are located at points A and C on the map, and you will need to create bridges by dropping the seeds on the glowing circles at the points marked B (the blue B only pertains to the bonus). There are two bridges near point A and two near point C, so it is convenient to have at least two players in the party to avoid having to run back and forth to the flowers. Picking the first vine seed from a flower group will do nothing, but picking the second and third seeds will each cause a group of Moss Scarabs to pop out of the ground, so it is better to pick only one seed at a time to avoid being overwhelmed. At point C the scarabs will spawn a short distance away from the flowers.

After crossing the second vine bridge, talk to Blade Scout Ryder (point D), who will send you on your own to defeat the White Mantle. After crossing two more vine bridges, you must defeat a few groups of White Mantle and their leader, Justiciar Hablion. The final fight with Hablion will take place on the Bloodstone itself after a cut scene, where you will be under the effects of Curse of the Bloodstone, making resurrection skills take 4 times as long to activate. Hablion is grouped with one White Mantle Knight and one White Mantle Abbot; there are also two additional groups to either side of him which consist of one Knight and Abbot. None of the groups are linked, so it is recommended to pull them separately.

Do the mission as normal until you reach point A. Grab a vine seed and go back the way you came. After descending the root bridge, you should notice a path on the western wall leading up to a brown platform with an orange rune on it (point 1). Dropping a seed on the platform will summon a druid, who will ask for your aid in awakening the Elder Druid. To do so, you will need to summon three more druids by taking a vine seed (a group of five flowers is at point 2) to each of three platforms (one at each point 3). Unlike the other flower groups in the mission, no Moss Scarabs will pop up when you pick seeds from these flowers, although they do pop up randomly around the rest of the bonus area. After being summoned, the druids will convene at point 4 around a large stone platform and begin to chant. After they summon the Elder Druid, speak to it to complete the bonus.

However, you must also avoid killing any of the Jungle Guardians in the area while completing the bonus. If you do, you will anger the spirits of the jungle, causing several Ravagers to spawn for each guardian killed and preventing the other druids from appearing when you attempt to activate their platforms (more ravagers will spawn instead). Luckily, the guardians will not follow very far, so you should be able to run past them without any trouble.

When summoning the druids, the western and eastern platforms can be reached without going past any guardians (for the eastern platform, head straight east from point 2 instead of following the path on the map). There are two pairs of guardians between the seed flowers and the northern platform, though, so be careful when running the seed to it.

After completing the bonus, the Jungle Guardians will remain hostile, although they will now ignore you unless you attack them first. If continuing on with the mission, you can either backtrack the way you came, or you can continue north past the guardians and follow an alternate route (blue path on the map) to return to the main mission path. On the way, you will walk past a lone vine seed flower in the water; take the seed to create a bridge at the blue point B.

Tip: This bonus can be done solo. Most of the enemies on the way to the first druid can be run past with little trouble, and only the Wind Riders pose any real threat, due to health degeneration, enchantment removal, and interruption; however they are fragile. Bring running skills such as Sprint, Dodge, etc., as well as self-heals. Once you reach the guardian area, the rest of the bonus is rather easy as long as you are careful.

Enemies are spread out enough to not be much of a challenge, even in hard mode. The only real danger is picking too many Vine Seeds at once and being overwhelmed by the Moss Scarabs that spawn.

Moss Scarabs have Verata's Gaze, which can steal minions. Minions may also attack and kill the Jungle Guardians during the bonus, so it may be best to avoid minions altogether.

The Jungle Guardians have Barbed Trap, so don't run too close to them. Henchmen and heroes will need to be flagged carefully to keep them away from the traps.

Saidra: If you're looking for Ryder, he's gone ahead to the Bloodstone, down in that clearing. The Mantle are taking the Chosen there right now. You'll need this, if you want to catch up. Drop it on the glowing circle to grow the bridge.

Druid: The jungle is in peril. The Elder Druid must be summoned. Awaken my brethren, the old Druids of Maguuma, the same way you woke me. They will summon the Elder Druid, but be careful. Do not harm the jungle guardians, or you will instead waken the ravagers.

Elder Druid: You have a kind spirit and a gentle soul. Go with peace.

Blade Scout Ryder: Look, I'm supposed to take you to the Bloodstone, but the Mantle wiped out my entire party, and I'm not going back. Go on if you want. But you should know, the stone disrupts divine energy. Those killed on top of it take much longer to resurrect.

Justiciar Hablion: I am the scythe, the Bringer of Salvation. And I shall harvest the souls of the Unbelievers. For their stench will linger. Until the false gods have been cast from this world. Well, well. If it isn't our old friends. We thought you'd been killed by the Shining Blade. But I see we were mistaken.

<party leader>: We're on to you Hablion. Your days of murdering innocent people end here.

Justiciar Hablion: I'm afraid you're mistaken. If anyone ends here, it will be you. Get them.

<party leader>: Prepare to pay for your sins, Hablion.

<party leader>: May your soul be lost in the endless Mists, never to find rest.

Confessor Dorian: The White Mantle have been called once again to arms. There are betrayers among us. Those who would masquerade as our friends only to turn and stab at our hearts. I have just received word that these traitors have murdered Justiciar Hablion.

White Mantle Ritualist: They must pay for this!

Confessor Dorian: Yes, my son. When these heathens attacked the White Mantle they chose their fate. Now it is for us to deliver upon them what they have asked for.

White Mantle Savant: Kill them all!

Confessor Dorian: Yes, my son. We will mete out justice and take our vengeance. Leave no stone unturned. Find the betrayers, find Hablion's killers. Kill them all.