Quests for this dungeon are found in the north-east corner of Sparkfly Swamp, north of Gadd's Encampment. The mutually exclusive quest options are Giriff's War (red side) or Tekks's War (yellow side). 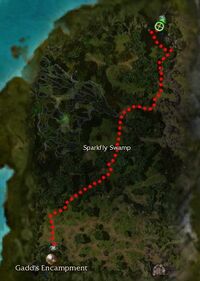 This dungeon and the two quests that take place here have numerous references to the machinima Red vs. Blue.