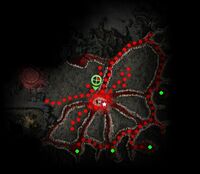 Spawn locations of the Stygial Lords

Adept of Whispers in the Stygian Veil

"The outer defenses are clear and many demons have been slain. Now we must seek and destroy the Stygian Lords. These four great demons are the Dreadspawn Maw's inner circle. We must slay them all to get to her. In doing so, we shall throw the demonic forces in this realm into total chaos, crippling their ability to spawn their infernal armies."

"You have the gratitude of the Order of Whispers. We have struck a great blow against the forces of Mallyx the Unyielding this day."

The four Stygian Lords are each at one of the four green points on the map. However, each trench has a few hidden spawns that will ambush the party. Upon entering any trench and getting near the half-way point, a large spawn of melee creatures will appear at either end of the trench and then run to the opposite side (sandwiching whoever is inside). Also, one or two Tormentor demons will spawn on the two cliffs overlooking the trench. It's recommended that the party have someone go in and trigger this spawn first before they enter the trench. This player can either just die in there and get Rebirthed from the cliff above or they can use a teleportation skill like Recall to return to their party members.

Going clockwise, the Stygian Lords on the map are as follows:

In addition the party should pay attention to the patrols roaming near each boss. Especially in the case of the elementalist as one patrol can come from behind the party and surprise them.

After cashing in the quest, six giant Smothering Tendrils will appear and the Dreadspawn Maw will open. Make sure before taking reward that all party members clear the area with the large maw and are up by the Adept of Whispers so they do not get killed by the Tendrils' special attack.

Players who seek to complete the quest Mallyx the Unyielding must now kill the Dreadspawn Maw. This is done by destroying the six Tendrils and the six mobs that will spawn (one from each Tendril). After killing a Tendril, a large number of Torment Claws will spawn accompanied by one mixed group of 6 or 7 Stygian creatures. It is recommended that the party not try to fight them then and there, instead pull away and let one player finish off the Tendril and, should that player be pursued by the spawn, they should let him/her die and then rebirth them. Trying to fight those creatures amidst the claws can be very difficult.

A progress indicator that shows up when players are near the Dreadspawn Maw will tell players their progress. Killing a Tendril or a mob will move it by 1/12 (the claws do not affect progress). After the Dreadspawn Maw is dead, a Stygian Chest will appear offering one Stygian Gemstone for each party member. Also, the path to Ravenheart Gloom will open.