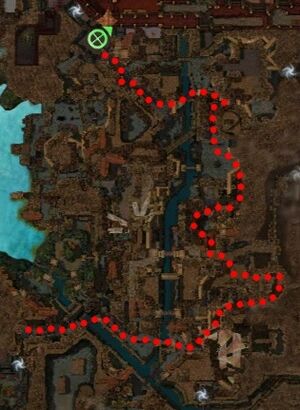 [Solo Quest] I've gotten word that Queen Salma of Kryta has sent a messenger with an important letter for Emperor Kisu. Unfortunately, we're a bit undermanned right now. Do you think you could head down to the Kaineng Docks and escort him over here?

Accept: Neither rain nor sleet nor a horde of Afflicted will prevent me from bringing him back.
Reject: Wait, you need a delivery boy to deliver the delivery boy?
When asked about quest: Head to the docks and meet the messenger from Kryta. The docks are next to the Marketplace.

You're here to escort me? Perfect! I was thinking a partner would be helpful. I've heard this town is crawling with all sorts of gangs and unspeakable horrors, so having someone to watch my back would be a great boon. Once you've got your brass knuckles equipped, let me know and we'll get going.

If you speak to him again without the Brass Knuckles equipped:

After equipping the Brass Knuckles:

Are you ready to show me your moves?

Accept: It's go time!
Reject: I am not worthy.

Intermediate Dialogue (as you progress through Bukdek Byway)

Courier Falken: Oh right, before we start I should teach you this move. Come over here and talk to me.
Courier Falken: It might be tricky for a beginner like you, but the key is remember to shout YOUR name not mine.
Courier Falken: Alright, let's get this letter delivered Falken quick!
<player character>: Okay, if we just head due north, we can reach Kaineng Center without too much...
Courier Falken: Not to worry! I consulted a map before I got here; I know where to go. After all, how hard could this city be to navigate anyway?

Courier Falken: This city is very...tall. But I heard it was more dangerous than this.
<player character>: Well, the Jade Brotherhood and Am Fah are pretty notorious around these parts for stirring up trouble.
Courier Falken: Roaming gangs, eh?

Courier Falken: Look! A band of ruffians aching for a fight. Let's give them some broken teeth to remember us by!
Am Fah Hooligan: What have we here? A little lost foreigner on our turf? Let's give him an Am Fah welcome beating!

<player character>: What kind of courier punches out the people who stop him from delivering mail?
Courier Falken: The best kind of course!

Jade Brotherhood Fighter: This is Jade Brotherhood territory, Krytan! Maybe if you give us all your coin, we'll let you go.
Courier Falken: If you hooligans are looking for small shiny objects, how about I show you my brass knuckles?

<player character>: Uh, I don't think we are going the right way.
Courier Falken: Nonsense! I have a perfectly good sense of direction. It's that way, I'm sure. Follow me!

Peasant Shopkeeper: Ah! My shop! What have you done? You foreigners are nothing but trouble!
Courier Falken: Such animosity in this town! There seems to be a lot of trouble here in Cantha.
<player character>: I'm pretty sure most of this is your fault.

Courier Falken: We're almost there! I can feel the letter telling me this is the right way!
<player character>: You didn't really read the map, did you?

Li Ho Yan: There he is! They're the ones that have been attacking our men! Your life was forfeited the moment you tangled with the Am Fah!
Tai Soon: The Jade Brotherhood have a score to settle with them as well! We'll kill you dirty Am Fah later; this foreign fool dies first.
Courier Falken: At last, the leaders arrive. I hope you're ready for this fight.
<player character>: You say this as if you were expecting it.
Courier Falken: My deliveries are always like this. Isn't that pretty normal?
Li Ho Yan: Stop ignoring us, Krytan! We'll string you up across the byway for this offense!

Courier Falken: YES! Another successful delivery! It was great fighting alongside you, friend. You have the true heart of a courier! I'm going to head to the palace now. Why don't you go tell the guy that sent you that I made it here safely?

This is a disaster! I can't believe a courier would punch out half the gangs in Kaineng on his way to deliver a simple message! I've already got complaints coming in from people about the disturbance it caused, and I'm sure neither the Am Fah nor the Jade Brotherhood are going to take this lying down. Sometimes I wonder if maintaining foreign relations is worth the trouble.
I suppose it's not your fault though. Here's something for your trouble.

During this quest, you will be under the effects of both Brawling and Falken Quick (permanent 50% movement speed boost). Instead of the normal Brawling skillbar, you will have:

For general tips on Brawling, see Dwarven Boxing. Specific to this quest, Falken's Fire Fist is a one-shot kill, so be sure not to waste it on foes who have already taken damage.

Follow Falken as he leads you through Bukdek Byway (no, he did NOT read the map), and help him knock out all the Am Fah and Jade Brotherhood along the way. When you reach the stairs just before Kaineng Center, a pair of bosses will appear: Li Ho Yan, an Am Fah assassin, and Tai Soon, a Jade Brotherhood warrior. Defeat them to complete the quest.

The bosses in this quest are named for famous boxers: