The Chaos Axe is an impressive-looking, elite-skinned Axe that looks like it has been fashioned out of plasma. Chaos Axes are highly desired for their rarity and their unique appearance.

Chaos Axes can be seen in the hands of Skeletal Berserkers in the Fissure of Woe, the Dwarven Ghosts hidden in every Dungeon, as well as your Doppelganger and, as of the Wednesday October 25, 2006 Update, in the hands of a Ghostly Hero.

Dye changes the color of aura the Chaos Axes emit.
Its default color is Yellow.
Darker colors produce smaller, fainter glows, where as white and silver produce wide bright auras. This effect of dye on the "aura" is cumulative. Increasing the number of dark (eg brown or black) dyes in a single application will reduce the "aura", while increasing the number of light colored dyes (eg white or silver) will increase the "aura".

The colors appearing on the item are the afterimage hue of the color dye used. For example, if you use red dye, green light will be around the weapon. 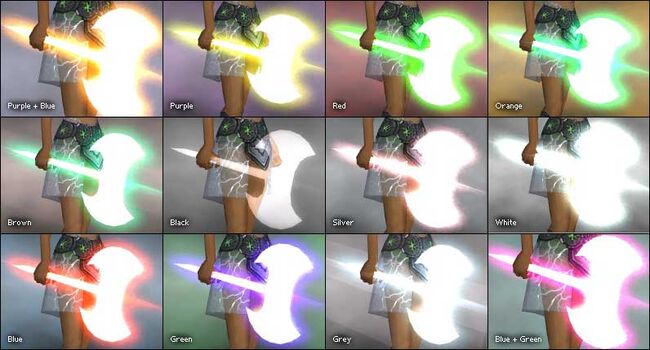 NOTE: Some dyes (e.g.: Brown and Grey) have glitches, where the weapon won't display in your shadow, and seems to appear with a layered see-through background while you're wielding it.