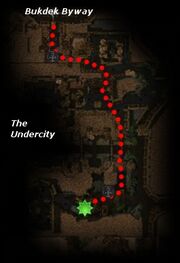 "Linro, an imperial guardsman Kormir met during her trip to Cantha, sent a missive about an assassin named Zenmai. Apparently the spearmarshal had asked Linro to keep his eyes open for any potential recruits.

If you ask me, he's just trying to pawn his problems off on us. He saw the assassin in Kaineng Center, apparently looking "suspicious." But, we can't afford to be picky, so I need you to go check out this assassin. She might come in handy if things get any uglier round here."

Accept: "A cold, refreshing assassin? I sure could use one of those right about now!"
Reject: "Things are going to get uglier? I just remembered, I have an urgent meeting... under my bed."
When asked about quest: "What are you still doing here? It's a long trip to Kaineng Center and I already sent word to Imperial Guardsman Linro to tell him you're coming."

"You're one of Kormir's Sunspears, aren't you? She mentioned some of you might come to Cantha. She wanted me to watch for any potential recruits to your cause. An assassin by the name of Zenmai recently got off the boat. Rumor has it she spent some time soul searching at Shing Jea Monastery. You should be able to catch up with her in Bukdek Byway. But be warned, she's not exactly a warm person."

"Sunspears? Sorry. Never heard of you. However, it would seem you are of some use in a fight.

As mo zing, a masterless assassin I move from employer to employer, like the wind. Unfortunately, my most recent employer was kidnapped by some former comrades, the Am Fah, along with several other civilians from Kaineng Center. They will force those poor souls to drink from their corrupted chalice, turning them into mindless, Afflicted monsters. I know the location of their hideout in the Undercity. If you can face the danger, I would have you stand at my side."

Lale the Vindictive: "At last, at last. The ceremony could not begin without the most important player. Zenmai, my dear, you've kept me waiting a long time. Too long. But it is an auspicious day that brings us together again. Did you truly think you could escape?"
Xeng Lu: "Zenmai...? Have you come to rescue me from these... these madmen?"
Zenmai: "I shall free you from the Am Fah... and then free you of the coin you owe me for my last job; do not mistake that. Dealing with Lale is a bonus. I do that for free."
Lale the Vindictive: "Such bile! Such anger! You're as cold as ever, Zenmai. Maybe if you weren't so frigid you'd move a little faster... You see, you're already too late for that one. To pass the time while waiting for you, we had some funs [sic], some laughs... and some drinks from the Chalice of Corruption. Just like old times, before you left us. Remember?"
Zenmai: "The past is a shadow that is behind us all, waiting to embrace you like the ground rushing up as you fall. I never forget the past, and today I shall settle its debts."
Lale the Vindictive: "A poet now, are we? You play at many things Zenmai. First you run from your past, like a mole that cannot face the sun. Now you come before me, playing the part of a hero. Very well. Let your blades speak, and we shall know the truth of your heart!"

Canthan Costumer: "I can't promise I'll remember your name when my fashions hit the big time, but I'll try not to forget what you've done for me on this day! Um, what was your name again?"
Canthan Poet: "Such heroism! / You will be remembered well / In my poetry"
Canthan Tourist: "I think it's time I reconsidered my reasons for traveling. It appears the grass was only greener on the other side because it was plague infested!"

"My blades have pierced the Shiro'ken as surely as they have cut down these creatures, these demons. Through my steel, I could feel the same evil. It can be no coincidence... there is something greater at work here. Come, Sunspear. It would seem that my answers lie in Elona. Besides, I can't collect my pay from a dead afflicted, can I? Perhaps I need a new employer...."

"Let me just dot the 'I' on your friend's temporary Sunspear Visa and it will be complete. There! This document will allow her free access to our ports and services. Have a nice day!"

After speaking with Linro in Kaineng Center, either start from the Marketplace which is closer, or travel south following the map marker. When you find Zenmai, some Am Fah (one Marksman, one Necromancer and one Assassin) will appear for a brief fight. Continue with Zenmai almost to Marketplace, then east across the bridge towards the entrance to the Undercity. Make sure Zenmai is near you when you get to the Undercity entrance. Sometimes she gets crippled by the traps laying around and gets left behind. If you enter Undercity before she gets near the entrance the quest will reset and she won't be with you in the Undercity.

In the Undercity, head to the location of the marker (just south of the weaponsmith, the same cavern Mina Shatter Storm usually inhabits). The area's usual residents are replaced by the quest NPCs and mobs. A long conversation ensues, allowing plenty of trap laying time, buff casting, etc. Once the final lines are spoken, combat ensues, during which the Canthan Trader is transformed into a level 20 Afflicted Necromancer and Xeng Lu is transformed into a level 20 Afflicted Assassin.

There can be very long waits between spawns of the Am Fah, Afflicted, and finally the Torment Creatures that pop up near the campfire. You may get the impression that the quest is glitched. Don't leave! In time they should spawn. It's possible that the spawn rate is bugged.

Keeping Zenmai alive is one of the greatest challenges as not only will you be up against a boss Elementalist, but a small number of Torment creatures. It is possible for Zenmai to be nearly out of health just a few seconds into the combat, so keeping a buff on her is a good idea.

Alternatively, after triggering Zenmai's dialogue with Lale, back off and flag your heroes and henchmen to remain behind. Zenmai will stay with the person who is doing the quest. As long as your band of seven heroes and henchmen (or other players) is capable of winning the fight, you can stay away and keep Zenmai uninvolved.

Note: You will have to go back to Kamadan and take the "Plague in Cantha" quest from Funwa Shento to unlock travel to Cantha before you can get to Kaineng Center.

This quest is a reference to Chasing Amy, a Kevin Smith movie.