Combat is one of the most important parts of Guild Wars. 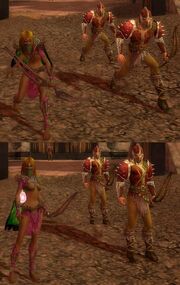 "In combat" is while the character is attacking. When an allied NPC is attacking, they will refuse to start a conversation or continue one, but instead yell out phrases telling you to stop talking and start fighting, or indicating that they are busy.