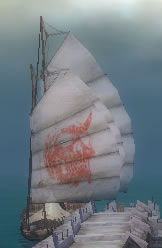 A pirate ship at Hanzing Pier, with the Crimson Skull guild emblem on the sail.

The Crimson Skull are a seafaring guild outlawed by the emperor himself for acts of murder, banditry, arson, and sedition.

Their Guild Hall is located at Port Kaimu. This harbor, and the one at Hanzing Pier, are their main bases on Shing Jea Island. From here they terrorize land and sea likewise, sailing the coasts as pirates and threatening the inhabitants of the island, coercing them to pay protection money.

There are several Crimson Skull ships in the small dock located north of the Raisu Palace, but no Crimson Skull can be found in this area.

The Crimson Skull started out as unorganized pirates that plagued the trade lines between Cantha and Tyria. After the Jade Wind in 872, which demanded the full attention of the new emperor, these pirates started to band together, further increasing the difficulty in keeping merchant ships and the shorelines safe. The Crimson Skull unwittingly played a large role in keeping Cantha in isolation from the rest of the world until trade began to be renewed after the Second Treaty of Lion's Arch in 1071.