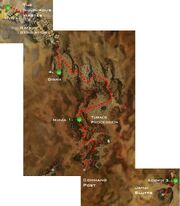 "You have stayed the darkness for now. But the real threat, Varesh, journeys across the Desolation. No doubt she left her demonic forces behind in preparation for an attack. Should you get across the desolation and break through her rear vanguard, you should catch her relatively undefended. However, no mortal soul can survive the sulfur clouds emanating from the Mouth of Torment; the terrible crater formed when the Five Gods struck down Abaddon. You must find a way across the Desolation. Other than Palawa Joko, our libraries have no record of any living creature surviving such a journey. The sands hold nothing but great wurms and bleached bones. Kormir recently sent word she needs to speak with you. Perhaps she has information. Will you go speak with her?"

Accept: "Anything for Kormir."
Reject: "This could be bad. I'll pass."
When asked about quest: "I don't know where your secret Sunspear Sanctuary is located, but I do know that Kormir is waiting for you."

"You got my message. Good. We need to find a way northwest, through the Desolation, but I fear my time on this world is nearing an end. My nightmares have grown stronger; stronger even than Melonni's. They tear at my soul. I know not how much longer I can hold together. You see, my eyes were... back in Gandara... I... nevermind. I need you to take Zhed and speak with Mirza. See if there is any way to cross the deadly sulfur. I will see what other information Nerashi and the others can dig up."

"The Desolation? It is death to step within its sulfur haze, for man and runner alike. Nothing living can pass through. Our people know better. But there was an ancient, undead king; perhaps you have heard of him... Palawa Joko. He enslaved our people to serve the undead ranks in his dark Bone Palace. It is rumored he even tamed the great wurms beneath the Sulfurous Wastes to do his bidding. Meet me in the Desolation and I'll show you."

"Do not step within the bounds of the sulfurous haze. Look. Do you see? Those are the very wurms Palawa Joko was said to have controlled. Perhaps they hold the answer you seek. Only Palawa Joko knows. But beware the deceit of the undead king. He would bargain with men's souls; promising three wishes and granting none, or granting them in ways that only served his wishes. Find Palawa Joko, if you must find a way across the Desolation. But beware deals made with such a two-legged devil."

"Palawa Joko, the sourge of Vabbi was defeated in the battle of Jahai by Turai Ossa. But that was not the end of his story. It seems he could not be killed. After the battle, it is said members of Turai Ossa's elite guard formed the Order of Whispers. These great hunters used powerful magic to bind him within a great tomb. They eventually built a monument commemorating the victory. My dreams have told me we must travel to this monument and see what awaits us."

Kormir: "I fear my time on this world is nearing an end. The closer we get to the Realm of Torment, the more I feel my mind bound to its power."
Shahai the Cunning: "Should I help you back to the Sunspear Sanctuary?"
Kormir: "No, Shahai. You have done enough. My nightmares have led me to this place many times."
(A torment rift starts to form)
Kormir: "AHHHHHHHHHH! I can feel Abaddon in my soul; in my mind..."
Kormir: "I will not let his darkness consume me here!"
Shahai the Cunning: "Noooo! Kormir! What dark magic is this? I must return to the Sanctuary at once and report this. Look around and see why she led us here."

Intermediate Dialogue 6 (Monument to the Defeat of Palawa Joko)

"This monument commemorates the defeat of Palawa Joko at the Battle of Jahai. After 100 days of bloody battle, Turai Ossa and his elite troops defeated Joko's undead forces of grey giants and undead centaurs. Yet, despite attempts made with magic, blade, and even darker means, Palawa Joko could not be killed. Turai Ossa's elite forces chained him by magic and bound him deep in the earth. Thus the undead lord's defeat was complete and Palawa Joko sealed away forever in a location kept secret by the Order of Whispers."

Palawa Joko: "Ah! Free at last.... Greetings mortal. I am Palawa Joko, the Scourge of Vabbi."
Palawa Joko: "I was betrayed at the battle of Jahai and sealed away by the cowardly Order of Whispers."
Palawa Joko: "I once commanded thousands upon thousands of undead warriors. Primeval kings were bound to my will. The great wurms of the desert were at my disposal."
Palawa Joko: "Such was the kingdom of Palawa Joko."
Palawa Joko: "The weakening of reality freed me. Now I must see to rebuilding my empire. For this chance to rule once again, I thank you... and bid you farewell."
Zhed Shadowhoof: "Let him run. With his stench he won't get far before my pride tracks him down."
Zhed Shadowhoof: "Dirah Traptail will likely be in charge of the hunt. Let's go meet up with him."

"We have the undying two-legs trapped. He was trying to return home to regain his throne. But it seems being buried and bound for so long has cost him all his power. What should we do with him?"

Player response: "Let us speak with him."

"Alright. Watch out for Zhed, though. He can get a little arrogant at times, especially when dealing with two-legged folk. Let me know when you are ready to speak with the dead one."

"Thanks for helping fight Varesh, the demons, and the undead. But did you need to wake up that smelly, undying two-legged abomination? Regardless, Mirza told me to give you this in thanks."

Enter Command Post From Sunspear Sanctuary with Zhed Shadowhoof in your party. After speaking to Kormir, follow the quest marker to the entrance to Turai's Procession. You will travel a short way to meet with Mirza. See the notes below, as other quests may be available or impact this one.

Once you have spoken to Mirza, continue on the path shown in the map on this page. Most mobs can be avoided. If you already have Gate of Desolation unlocked, you can map travel instead. Exit to Sulfurous Wastes and speak with Mirza, avoiding any foes. Map travel to Sunspear Sanctuary, speak with Kormir again in the Command Post, and continue to the portal to Jahai Bluffs. Speak with Kormir and click on the monument's sign to trigger the scene. After this, you can map travel to Gate of Desolation and then exit into Turai's Procession. The centaurs and Palawa Joko are found just a short distance to the south. There is one Kournan patrol on the way, but you can wait for it to pass if you don't want to fight it. After the cutscene, you will again be in Gate of Desolation and can claim the reward there.