The Crystal Overlook is an explorable area in The Desolation, though it bears some resemblance to the Crystal Desert to the north. The sand is a lighter shade of grey than the non-sulfurous sand in the rest of the Desolation, closer to the yellow-brown of the Southern Crystal Desert. There is also little stone or sulfur here, but despite that, not much of this area may be traversed on a Junundu due to its placement. There is a ruined village and a graveyard along the north edge, established during Turai Ossa's ill-fated pilgrimage to the Crystal Desert. 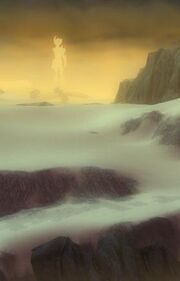 The statue of the female warrior in the Arid Sea can be seen on the horizon.
Retrieved from "https://guildwiki.fandom.com/wiki/Crystal_Overlook?oldid=1612908"
Categories: