The Divine Path is an explorable area in the Factions Campaign. It is a skyway that runs above Raisu Palace.

Can only be accessed by completing the Imperial Sanctum mission. If you want to re-enter after leaving, you have to complete the mission again.

This is the area where the party starts out in.

The next area contains several armor and weapon crafters.

On the way to the crafters, you will meet Mhenlo, Devona, Eve, Cynn and Aidan. A little beyond the crafters are a number of Canthan Nobles, Peasants, and Children who will sing your praises.

If you are intending on crafting any of these items, you should note that there are no Xunlai Agents, Material Traders, or Rare Material Traders available. You must have all the needed materials as well as the gold prior before starting the Imperial Sanctum mission.

You will then enter a long corridor where you will meet several key characters who accompanied Master Togo from Shing Jea Island, including:

This corridor ends with the leaders of the Angchu Tengu: Soar Honorclaw from the Aerie and Roost Everclaw from the Roost. You will also meet your old friend, Talon Silverwing. Note the different weapons and shields each of them wield.

Down the stairs will be a honor guard of Tengu Cutters, who will bow to you as you pass.

After the Tengu, you will meet the Kurzicks, led by Count zu Heltzer. You will encounter again several characters from the Echovald Forest, including:

Immediately after are the Luxons who have come all the way from the Jade Sea to pay their respects. The group is led by Elder Rhea, and includes:

As you near the end of the Divine Path, you will meet the chief ministers of the Celestial Ministry. Bloated with corruption, the weight of your deeds is entirely lost on them as they struggle to determine which forms they have to fill up to satisfy what obscure bureaucratic procedure.

The surrounding Canthan Peasants will tell you to ignore the ministers, for they were completely ineffective at dealing with the Plague.

You will also meet the Canthan natives, Emi, Chiyo, Jamei. Nika and Guildmaster Luan of the Obsidian Flame guild also pay their respects.

Canthan Nobles are also among the group.

There is a Phoenix here for you to tame. 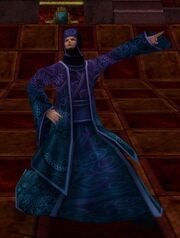 At the end of the Divine Path, you will find Emperor Kisu surrounded by his Canthan Guard Captains.

The Heroes of Ascalon[edit | edit source]

Brother Mhenlo: "Ah there you are, <party leader's name>. I wanted to let you know how grateful I am for all that you have done."
Cynn: "Can we leave now?"
Devona: "Cynn, you're being rude..."
Cynn: "I'm just speaking my mind, Devona. I'm sure Mhenlo had a wonderful time visiting with all his old friends, but it's time we headed back to Tyria."
Eve: "I think somebody is jealous."
Cynn: "Jealous? Of who?"
Eve: "Oh, I don't know. Perhaps Jamei. Or the twins. Or Danika. Or maybe that nice guard that lead us into..."
Aidan: "That's enough, Eve."
Brother Mhenlo: "We don't need to fight among ourselves. Besides, Cynn is right. It's time we headed home."

Zho: "Well met, <party leader's name>! Many have come here from Shing Jea Island to honor you."
Panaku: "We are also here to mourn Master Togo. I regret that he will not see me atone for my past. I know that I was a disappointment to him."
Headmaster Vhang: "Do not dwell on such things, Panaku. We have important decisions ahead. Who will take Master Togo's place? I could be the youngest to ever hold the position. I am sure it is what Master Togo would have wanted."
Kai Ying: "And people think I am always joking."
Headmaster Vhang: "But I am not joking."
Kai Ying: "That is the problem."
Mei Ling: "So, after you defeated the Luxons in the Convocation, what happened next?"
Lo Sha: "Now, now, Mei Ling, I had help. <party leader's name> was there, too."
Mei Ling: "You are too modest, my love."
Talon Silverwing: "The Tengu honor your deeds this day, <party leader's name>. You have shown my people that nobility and strength of spirit may be found among humans. You have given us hope that we may yet know true peace. For this you will always be welcome among us."

Emperor Kisu: "Cantha mourns the loss of a great man this day. Master Togo was beloved by all. His service during the Tengu Wars brought peace to a nation at war. Perhaps his greatest accomplishment stands embodied before us. In our time of greatest need he brought forth heroes, the likes of which we have never seen before and likely will never see again. You have done the impossible. You have defeated Shiro. You have brought an end to the plague. You have brought peace, however brief, to two peoples who have known only war. You have saved Cantha. And for that, I bow to you."

It is possible to get to the Divine Path with a full party of henchmen still in your party list (normally they get removed). Achieving this is somewhat unpredictable, but it requires all but one of the party members to leave the game while the Imperial Sanctum final cutscene is playing. In the Divine Path you will see duplicates of every henchman in your party, and you might discover such startling facts as that the wallow henchmen (Brutus and Sheena) are actually larger in size than the corresponding NPCs.