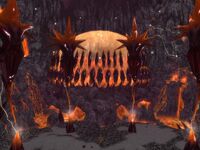 The Door of Komalie is a sealed, magical gate in the Ring of Fire Islands. Locked behind the Door of Komalie are the Titans: a powerful and destructive race. The Mursaat dread the power of the Titans and attempt to ensure the Door is kept closed at all cost. The Door is sealed by the power of Soul Batteries that feed on the souls of the slain Chosen sacrificed on the Bloodstones by the Mursaat and their White Mantle cohorts.

The Lich Lord seeks to unlock the Door of Komalie and recruit the Titans - through the power of the Scepter of Orr - as his own army in an attempt to control all of Tyria. He succeeds in his objective at the end of the Abaddon's Mouth mission through manipulation of the players, who then must fight to close the Door again in the Hell's Precipice mission.

The final three Missions in the Prophecies campaign take the player to the Door of Komalie. If players travel to Hell's Precipice, they can see the door left open if they look to the north east while standing on the circular Bloodstone.

The other end of the Door of Komalie opens into The Foundry of Failed Creations in the Realm of Torment.