Dunkoro is one of the Heroes available in Guild Wars Nightfall. An older advisor within the Order of the Sunspears, Dunkoro is the man with the plan.

"The outcome of a battle is determined before the first soldier leaves the barracks."

A lifetime of experience has made Dunkoro the man he is today: a master strategist who knows his way around Elona. He's a veteran of countless battles against pirates, centaurs, desert raiders, Thumpers, and stranger enemies. With that wisdom has come a realization that he's not the best soldier to lead a charge; instead, he prefers to advise those who do. Not everyone accepts his advice, though. Some claim that he's become too careful with old age, that he's lost the edge that makes him a deadly soldier. Time will tell. For any hero who would hesitate before rushing into battle, Dunkoro would be a valuable ally. If you're willing to listen, he's the man with a plan.

A lifetime of experience has made Dunkoro the man he is today: an elder strategist who knows his way around Elona. He's a veteran of battles against corsairs, Centaurs, heket, desert raiders, and stranger enemies. Although he's faced countless dangers alone, he prefers to spend his time advising other soldiers, offering direction and insight to any soldier who will listen. Unfortunately, not everyone listens to his advice. Most recruits respect him professionally, but personally, he remains distant from everyone below him in rank. When life and death are on the line, he doesn't seem to care about other people's fears and concerns, only results: you win, or you die. With this determined and unemotional approach to warfare, Dunkoro's insights have meant the difference between victory and defeat throughout his career. For any hero who prefers rational strategy over chaos, Dunkoro is the man with a plan. 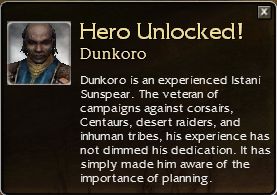 Complete the primary quest Leaving a Legacy, which is obtained from First Spear Dehvad.

Characters of other campaigns unlock Dunkoro during the primary quest Battle Preparations, obtained from Seamarshal Bendro.

R indicates that Dunkoro must be in the party

Dunkoro starts with basic Monk armor, which includes a Prophet's Scalp Design, labeled as Sunspear Armor but with its own unique appearance. The headpiece provides +1 in the attribute of the rune applied to it. His armor rating ranges from 3 to 60, depending on his level.

In the Cliffs of Dohjok and the Command Post:

"You can't just run off without a plan. Let me help you. I've been with the Sunspears for years. I plan our strategies. Kormir executes them. Let me do the same for you."

"Choose your words carefully; the slightest implication will have great repercussions."

"I never could have planned for this day... but all the same, I am glad to see it."

Abaddon's Gate and after completion of Nightfall: