This background lore related article is a stub. You can help by adding to it according to the style guide.

Warning: The following text contains spoilers relating to the plot of the Eye of the North expansion. 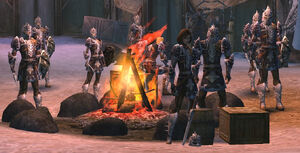 The Ebon Vanguard - originally made up of an official unit, the Ascalon Vanguard - operates behind the Charr lines. As the unit pressed north, it picked up human refugees,exiles, and escaped prisoners from the Charr work camps. Together they forged a new organization, toughened by their experiences and more flexible than a traditional military unit. Upon finding the Eye of the North, The Ebon Vanguard established it as a base of operations for their covert campaign of disruption. The Ebon Vanguard is led by Captain Langmar, and its ranks include Gwen and Anton, among others.