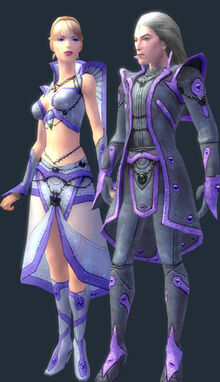 The Elementalist is the classical "fireball-and-lightning bolt" spellcaster of the game. Their power lies in their ability to do a large amount of damage in a short time with effective energy management skills. Their spells can deal considerable AoE or spike damage, as well as provide supportive wards to protect allies. Elementalists are one of the most sought-after classes in PUGs (behind Monks) due to their sheer damage output. An Elementalist primary may also often be paired with another caster class as secondary (Necromancer, Mesmer, or Monk), simply to gain the benefits of their primary attribute, Energy Storage. The patron deity of each Elementalist varies according to their specialization: Dwayna to Aeromancers, Balthazar to Pyromancers, Melandru to Geomancers, and Grenth to Hydromancers; Lyssa is the goddess associated with Energy Storage.

Glyphs are exclusive to the Elementalist profession. However, perhaps because of this, Elementalists are the only class that have no signets at their disposal.

See Secondary professions for an Elementalist