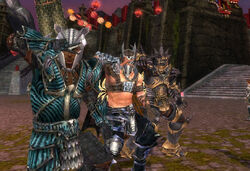 An example of three Warriors synch-dancing with the "/dance *" emote

An emote is a special type of text command entered in chat, that will make your character perform a certain action, most usually an animation that can be seen by all nearby players. These animations are particular to the Profession and gender you have chosen for your character. Therefore, a male Warrior for example will perform a different action after the /dance command than the female Warrior, and the Mesmer will always dance differently from the Elementalist.

Players can synchronise some emotes with other players by adding a space and an asterisk after the command. For example, typing "/dance *" starts players dancing at the next "beat". The beat is set by the game and goes off every 5 seconds. This function is often used with the /dance, /highfive and /goteam emotes.

This list contains emotes only, commands that have pure informational value and will not result in an animation are listed on the commands page.

Using the Kneel emote before a god's statue will summon an avatar of the god if the world has the Favor. In Droknar's Forge, kneeling at the altar of the Dragon Glint after completing Hell's Precipice Mission will allow you to do the Titan Quests.

All currently known emotes in Guild Wars are:

* These loop and the character will continue to perform the emote until another one is entered or the character moves. In the case of /rock, /paper and /scissors you will stay standing with your hands extended in the emote of your choosing until you do something else.
** The /roll emote can not be used in a town or outpost.

Note: Any non-loopable emote will end the CE effect.