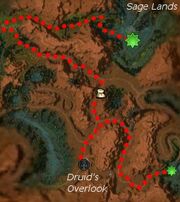 "Good day to you. Perhaps you could help me with a little situation. I recently hired a young man by the name of Grahm from Loamhurst to accompany me on my travels. Not the sharpest arrow in the quiver, but he has a strong enough back. I sent him to the Sage Lands looking for a beast called Gale Stormsend. If legend be anything to base fact upon, it carries within itself a rare and precious jewel known as the Lilac Eye."

"No doubt Grahm is either lost or eaten. If you could find him or his remains for me, so I know whether or not I have to hire another hand, I would be grateful. If you could manage to find Gale Stormsend, return me the Lilac Eye and you'll be rewarded most handsomely."

"I found the beast m'lord Versai sent me after. It was to the North by a large waterfall."

"Ah, the Lilac Eye! So it does exist. This will fetch a handsome sum in Lion's Arch no doubt. Oh yes, did you find any part of young Grahm? He lives, eh? What a bother. I had rather hoped that I wouldn't have to pay him. In any case, many thanks for your service." 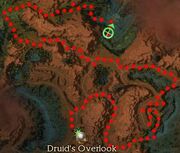 Map of the quest path if you do not skip talking to Grahm.

Gale Stormsend will spawn even if you didn't talk to Grahm first, so you can skip that part. If you don't want to skip it, Grahm stands at the bottom of a valley to the east of Druid's Overlook. To get there go north and take the first path off to the east. Some Devourers and Stalkers along the way can cause you trouble.

Map of the quest path if you skip talking to Grahm.

Gale Stormsend is in another valley further to the north. It's best reached from The Wilds. From the entrance keep to the left and head due east. Beware of hidden Spiders and Scarabs along the way, as well as some Riders. Notably, there is a group of Riders with the boss Zarr MentalMelt that seems easy enough, but is actually next to a large group of spiders so be cautious.

When you battle Gale, be sure to stay in the water as it gives you +1 health regeneration. When defeated, Gale will drop a Lilac Eye. Upon picking it up, the quest will be updated.

You must return this item to Trader Versai in Druid's Overlook for the quest to be completed.

Alternate approach: The end of the path as shown takes you through batches of Spiders that tend to attack in swarms, targetting henchmen and causing even some groups of players difficulty. A longer but easier path, especially when working without the assistance of other players, starts from from Temple of the Ages and allows use of level 15 henchmen and a party size up to eight. This path goes through The Black Curtain, Talmark Wilderness, and Majesty's Rest, bypassing the tricky spider packs, but requires dealing with Inferno Imps in Talmark Wilderness.