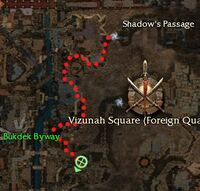 "Excuse me. I have a message from Master Togo and Brother Mhenlo. They said you should meet them in Shadow's Passage."

Accept: "Thank you. I'm on my way."
Reject: "Maybe later."
When asked about quest: "I don't know anything about an Oracle. I think my sister has mentioned an oracle or something before, but she is always saying crazy things. Why are you asking me though? I am just a messenger. Your friends Mhenlo and Togo are waiting for you in Shadow's Passage."

"Nika was just starting at Shing Jea my last year there, but I got to know here fairly well. She's an Assassin with the Obsidian Flame now and spends her time in Bukdek Byway, I believe. If anyone can help you find the Oracle of the Mists, she can. The only trick will be getting her to help you. She can be a bit willful, and believe me when I say you don't want to make her mad. Just tell her Master Togo sent you."

"That's right. I'm Nika the Assassin and I am a member of the Obsidian Flame. It does not surprise me that you know my name. Nor even that you have heard of my exploits becoming Closer to the Stars. But what I am wondering is why is it any of your affair? Well, are you ready to explain yourself?"

Closer to the Stars

You have been transported to Dragon's Throat after completing the Vizunah Square Mission; Messenger Gosuh sets you on the path to Finding The Oracle. Take the exit to Shadow's Passage and find Togo and Mhenlo on the stairs just below your entry point. They will tell you to find Nika; you have several ways to reach her:

When you come upon Nika, she will be in the midst of a conversation with some guards. When that is over, speak to her to claim your reward and collect the next quest. Note that there is a patrolling mob here that is quite easy to aggro if not paying attention to them.