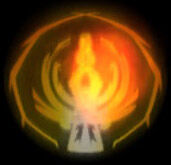 Fire Magic is an Elementalist secondary attribute, meaning that any character with Elementalist as their primary or secondary profession can put points into this attribute.

Many Elementalists choose Fire Magic for its ability to inflict massive amounts of damage to numerous foes. It is also the first school of magic that Elementalists are introduced to: many of the effective Air Magic and Water Magic spells don't appear until more than half way through the campaign. Fire Magic is limited in its ability to do anything other than damage opponents, as every skill related to the attribute, except Fire Attunement, serves a purely offensive role (including running speed). However, Fire Magic skills are very effective at what they do, diminishing the health of foes in as many ways as possible.

The most basic Fire Magic skills are the ones that simply do damage to one or more targets: Flare, Fireball, Inferno, and Flame Burst. These are often used when energy is low. Fire Magic has some skills that set fire to the target: Immolate, Incendiary Bonds, Rodgort's Invocation and Mind Burn; they are useful against tough foes. Also, Mark of Rodgort causes a foe to ignite whenever they are struck with any fire damage.

Many Fire Magic spells cause AoE damage. Fire Storm, Lava Font, and Searing Heat all cause damage over time to an area. Meteor and Meteor Shower both deal vast amounts of damage and knock down foes. Phoenix is basically a combination of Inferno and Fireball.

While other schools of Elemental magic offer more intricate ways to destroy your enemies, such as blinding them, weakening them and slowing them, Fire Magic relies on outright damage. An Elementalist using Fire Magic will find that it is easy to run out of energy very quickly, with 25-energy spells like Meteor Shower and Rodgort's Invocation. In addition, many of the spells cast quickly and cause exhaustion. This means the Fire Mage can be his or her own worst enemy, quickly running out of energy and being reduced to normal attacks. However, using skills such as Ether Prodigy or the combo of Elemental Attunement and Fire Attunement (not Ether Prodigy and Elemental Attunement together because they are elites) can solve energy loss problems.