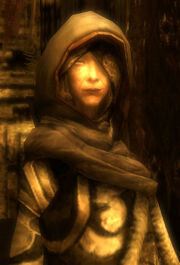 The mysterious Fortune Teller was a poor old woman living in the city of Kaineng when she saw Shiro Tagachi, a member of the city guard. The Fortune Teller told him that he was destined for greatness, and that good fortune would come his way. Shiro was skeptical at first, however soon after had good fortune begin to shower upon him.

He later returns to the old woman to learn more of his fate. She then predicts to Shiro that he will be promoted to the Emperor Angsiyan's personal bodyguard. Soon after, he is called to meet with the Emperor, where the honor of being his personal guard is bestowed on him.

Shiro, after this unbelievable turn of events, returns to the Fortune Teller yet again to know more of his fate. However, the old woman then warns Shiro that Emperor Angsiyan is going to kill him during the Harvest Ceremony at Kuan Jun Temple. She predicts that the Emperor will kill him, if he does not kill the Emperor first. Shiro is outraged by this, and murders the Fortune Teller.

Her predictions still echo in his mind later on when he is trying to decide whether or not he should kill the Emperor to save his own life.

Shiro eventually decides to murder the Emperor. Shiro is then killed by Archemorus, Saint Viktor, and Vizu.

Warning: The following text contains spoilers relating to the plot of the Nightfall Campaign.

The Fortune Teller makes a reappearance in the Nightfall campaign - the optional quest Bad Fortune allows players to track her down and destroy her once and for all. This quest also states that she was a demonic agent of Abaddon who manipulated Shiro into assassinating his Emperor and corrupted his soul. It does not reveal why, however.

For her skills as a demon, see Demonic Fortune Teller.