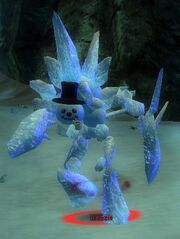 Freezie in Secret Lair of the Snowmen

The Underworld, and Secret Lair of the Snowmen

(only in Nebo Terrace)

"Hi mortal! I am Freezie, the greatest snowman ever made! It seems that all those magic bits you made me out of turned out to be a potent combination! Don't worry if I melt, I'll be back again next year!

Meanwhile, let's go spread some Wintersday joy to those Grentches and Humbugs!"

Secret Lair of the Snowmen:

"This is a sacred and holy place. For your trespass you shall be punished with icy snowballs...of death! Right in the eye!"