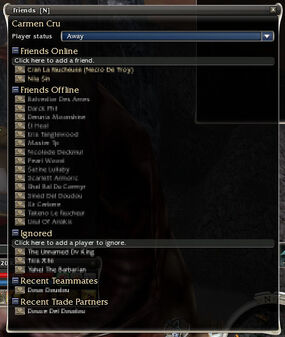 Head icons: Each name has a small head-shaped icon beside it. Clicking on this gives you more options; you can move a name between "Friends" and "Ignore" or remove their name altogether.

Using the player status dropdown list at the top of the friends window you can show your friends that you are online, offline, away, or do not wish to be disturbed:

If they are logged in with another character on that account, that character's name will be displayed in parenthesis next the character name you initially added. The friends list can hold 50 names.

Players added to your friends list will not show up in Recent Teammates or in Recent Trade.

Note: You don't have to add a person to the Friends List to send them a whisper, tell, or PM.

The Ignore list allows you to add players (character names) of people whom you do not wish to hear from, for whatever reason. Adding a person to your ignore list blocks all messages from that person, and prevents his/her text from appearing in your chat windows.

If a player you have on your ignore list tries to whisper you, he or she will receive a message in green text: {Your Character's Name} is ignoring you.

The Recent Teammates list allows you to see players that played with you in your current gaming session that are not in your friends list.

The Recent Trade Partners list allows you to see players that exchange objects via the Trade Window with you in your current gaming session.