Frostmaw's Burrows is a 5-level dungeon that is the lair of the infamous Frostmaw the Kinslayer. You must have the quest Cold Vengeance active in order to progress past the first level.

From Sifhalla, travel north in Jaga Moraine. The entrance to Frostmaw's Burrows is surrounded by a small group of Norn at the very top-center of the map. 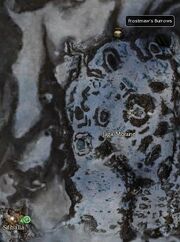