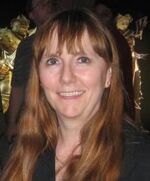 Gaile Gray is the former Community Relations Manager for ArenaNet and the current Support Liaison.

As Community Relationship Manager (CRM), she was known for appearances in game (with a Level 7 Ranger/Monk named Gaile Gray), where she conversed with players and organized giant conga lines. Gaile Gray's eponymous avatar appeared primarily in Lion's Arch, Kaineng Center, Shing Jea Monastery, Kamadan and Gunnar's Hold in International District 1. As with other game masters, her chat text appeared in purple (previously green) and she had a big, green "GM" sign above her character's head.

Gray has confirmed that she also has other characters (including a non-playing 'Canthan' character) on a different account; the names are kept secret, so that she can enjoy some privacy while playing and converse with other players incognito.

Gaile Gray and The Frog
Main article: The Frog

For a long time, people speculated whether Gray controlled the oracle avatar known as The Frog, since ANet staff members refused to address the topic. Then, in a now well-known dual appearance, Gray accidentally exposed herself as the puppet master when she accidentally caused one of The Frog's PMs to be sent by her Gaile Gray character instead of by The Frog.