General Morgahn is one of the Heroes available in Guild Wars Nightfall. He is one of three generals of Kourna and is a devotee of Lyssa.

Three generals report directly to Warmarshal Varesh Ossa. General Morgahn has known her the longest, having served under her father for decades. When Varesh was born, Morgahn spent years assisting with her training and the shaping of her character. As a loyal patriot, he considers duty and honor to be the highest virtues a soldier can have. Although Varesh is curious about lofty philosophical concepts like Ascension, Morgahn keeps to a simple faith. He's a devout follower of the goddess Lyssa, holding great respect for artists and crafters. Like any good soldier, he chants his prayers to Balthazar when charging into battle, but in the dark of night, it's his faith in Lyssa that sustains him. 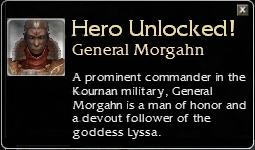 Complete the Grand Court of Sebelkeh mission, which becomes accessible once the primary quest Pledge of the Merchant Princes is completed.

R indicates that General Morgahn must be in the party

General Morgahn starts with maxed Kournan armor at armor rating 80. His headgear is a Kournan Regalia. He comes with a customized Suntouched Spear (14-25 dmg, rq 8, 10% dmg when health is above 50%) and a Heraldic Shield of Fortitude (armor 16, health +25, requiring 9 Command). The shield can be salvaged for crafting materials, the spear cannot.

The appearance of his armor can be upgraded to Mysterious armor using Mysterious Armor Pieces acquired from the Shadow Nexus Challenge Mission.

The appearance of his armor can be upgraded to Primeval armor using Primeval Armor Remnants acquired in the Domain of Anguish and during The Ebony Citadel of Mallyx mission.

"Lyssa teaches us that the glory of leadership is found in duty and honor."

"I am both a soldier and a follower of Lyssa. The two are not in conflict. Both demand devotion and dedication. Without those virtues, a man is worthless."

During quest Pledge of the Merchant Princes, in the Mirror of Lyss:

"The princes were blinded to Varesh's threat by their greed and opulence. I was blinded by loyalty and honor. Lyssa has taught me to look past the illusions in which I encased myself. For the first time in my life I can see clear as day."

"Lyssa must have heard my prayers. Kourna is saved and my dishonor is forgiven. Praise the Six Gods!"