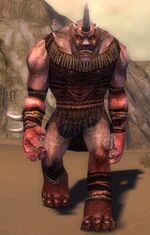 A Sand Giant, a typical Giant

Giants are a class of monster, i.e. a species in the bestiary of Guild Wars.

Giants in Guild Wars are large humanoid creatures. They are more than twice the height of humans and possess great strength, but their bodies usually show more beastial features such as huge horns, tusks or fangs.

Most Giants are warriors, but not all are melee attackers, as some throw huge rocks from a distance. They will usually be found in groups of 2-3.

Because of their large size and great strength, Giants posses two noticeable attributes:

Giant-kin creatures in the game include Ettins and Trolls but they do not possess these abilities.

On the weakness side, keep in mind that Giants ...

Giants may drop the following loot (besides gold and various weapons and items):

Giants are found in many regions of Tyria.

For an alphabetic list of all Giants, including bosses, see also: Category:Giants