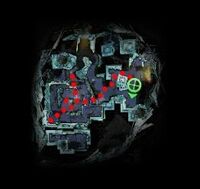 Obtained from Consular Brand Oakencask in the Central Transfer Chamber

The main mission area contains three entrances to a room with the baby dragon. The rear entrance connects to an elevated loop that encircles the arena. There are two side gates which lead to pathways and monster spawn points. In the center, the baby dragon rests on an elevated platform.