Goren is a Warrior Hero available in Guild Wars Nightfall. A slow, solid, dependable bodyguard who makes up for what he lacks in wits with an ironclad devotion. He was in the employ of Prince Bokka the Magnificent as a bodyguard.

"The prince likes to give orders. I like to take orders. It's a good life."

Goren is big. Goren is strong. Goren is really, really good at sprinting into battle. Unfortunately, Goren isn't exactly the sharpest blade in the armory. He understands everyday conversation, and he can carry out simple commands – particularly sentences with the words "hit" and "smash" in them – but the finer philosophical passages of the Flameseeker Prophecies will remain eternally outside his comprehension. Eager for work, Goren has found employment working as the bodyguard of Prince Bokka the Magnificent. Money and influence don't mean much to him, though. Loyalty does. 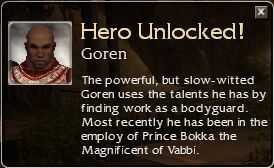 Any character that selects Goren for Brains or Brawn must instead complete the Nightfall campaign by finishing the Abaddon's Gate mission, then accept and complete the quest Gain Goren, given by Goren in the Throne of Secrets.

R indicates that Goren must be in the party

The appearance of his armor can be upgraded to Mysterious armor using Mysterious Armor Pieces acquired from the The Shadow Nexus Challenge Mission.

The appearance of his armor can also be upgraded to Primeval Armor using Primeval Armor Remnants acquired in the Domain of Anguish and during The Ebony Citadel of Mallyx mission.

Goren hefts a customized Barrel Hammer of Fortitude with 17-30 damage, +20 HP and +20% damage from the customization. With that, the damage is better than a non-customized maximal hammer.

"The boss says to stand here and guard. I better not move or he'll get angry."

During Brains or Brawn and Goren's Stuff: Part 1:

"Wait, what? Oh! Hi! Did you need protection? Want me to hit something? Need a backrub? Whatever you want, boss. Prince Bokka said I was the best bodyguard to ever work for him. But I think he just said that because he wasn't dead. I mean, I guess that's good, right?

During the Dasha Vestibule mission:

"I hope Prince Bokka will be happy to see me."

Pledge of the Merchant Princes