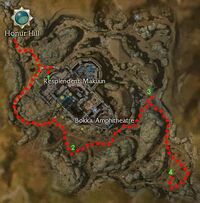 "I am worried about Nightfall. I don't want the world to get destroyed. It's where I keep all my stuff. Maybe I could bash some things and keep my stuff safe. I used to bash things for Bokka. He'd yell and make people get out of the way. Bokka always took good care of me. If you help find my stuff and keep it safe... you know... in case the world gets destroyed, I'll do some bashing for you. Let's go collect my stuff!"

Accept: "Sure we can help you get your stuff."
Reject: "Don't worry. We'll save the world. Your stuff will be safe."
'When asked about quest: "I keep my stuff all over the place, east and south of Resplendent Makuun. We should head there right now."

Goren: "I don't understand why people use the Xunlai Agents. These monsters protect my stuff just fine, and I don't have to pay them anything. Hmmm. My weapon is around here somewhere."

Goren: "Some times I forget things... like where I put my armor."

Goren: "Oh. Was it over there? That's funny I don't remember leaving it there."

Goren: "I put most prized possession in the whole wide world somewhere around here."

Goren: :"There it is! It's such a pretty rock. I like to keep it close. Pick it up and give it here."
Goren: "Now let's find a safe place for my stuff!"

"So, you want to set up a Xunlai account for your oafish friend because he's afraid he'll lose stuff if the world ends? That won't be a problem. We'll even waive the 50 gold fee this one time in consideration of all the business you have done with us.

Well, it looks to be your lucky day. Your big brute of a friend asked me to tell you that he'd be joining you on your adventures from now on, since you've been so helpful and generous. I believe you might find his brawn more useful than his brain, if you know what I mean."

The quest starts at point 1 where the player will encounter Goren who follows you to the quest markers. You will mostly encounter groups of Skree along the way. At each point, make sure to clear out all the groups around it. Once Goren gets near a spot, he will start searching the area around the quest marker and will aggro any groups you did not take out. After he searches for a bit, he will find some of his stuff and then you move on to the next marker.

Between points 2 and 3 you will encounter Josinq the Whisperer, accompanied by roughly six Skree. This is a tough mob, and it is advisable to either detour to the East, or take out this mob before picking up Goren as he will almost certainly get killed.

Between points 3 and 4, Bansheh, Gatherer of Branches roams the area. By backtracking out of the cavern after getting armor, you can loop along the west flank and avoid the Bansheh battle.