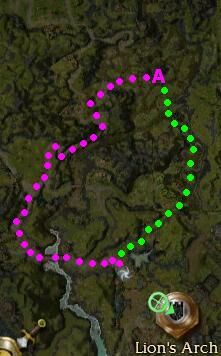 "Hello there! Am I ever glad to see you. I was out here trying to transcribe some of the images engraved on these ruins and...well, normally this is such a trivial task...but this time, whenever I begin, shadowy Nightmares emerge from the ground and drive me away.

You appear to be a capable (character profession). Could you keep the Nightmares away while I finish my work?"

Accept: I'll watch your back.
Reject: You're on your own.

"Many thanks, my friend! I'm not sure why those infernal creatures were so intent on keeping me from transcribing those images, but I can't wait to return to my workshop and begin deciphering them."

To find Archivist Ithimar, start from Lion's Arch and follow either path on the map into the swamp (which is not poisonous). The shorter path is the green path. It is guarded by

Bog Skales, while the purple path is guarded mostly by

Fire Imps. At point A you will find some ruins on top of which Archivist Ithimar stands.

Nightmares will appear at the foot of the ruin (right where most of your party will probably be standing). After defeating them you will get another group of two, then three and finally four Nightmares. Note that those Nightmares are not instantly aggressive, so you have a little time to catch your breath between fights. They also do not attack Archivist Ithimar.

Tip: Try to do this quest when you have activated the quest The Ascalon Settlement. Devona and the other Ascalon Heroes will be a great help dealing with the Nightmares.