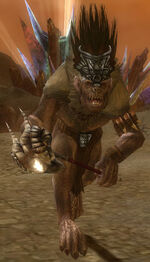 Grawl are a class of monster, i.e. a species in the bestiary of Guild Wars.

Grawl are a humanoid ape-like species. They have light gray fur and like to wear a crown of feathers on their heads.

The Grawl have developed a culture, although, of all the bestial humanoid species, such as the Charr and the Tengu, the Grawl seem to be the most primitive and least intellectually endowed.

Grawl are usually found in groups consisting of 2-3 hammer warriors, accompanied by 1-2 healer monks or necromancer. Sometimes these groups cluster, which can result in much larger numbers.

The Grawl normally don't mean much of a threat, unless you aggro too many at a time. The warriors can be annoying with their knockdowns, but can't take much of a beating unless constantly healed by the monks. As usual, take out the healers first.

On the weakness side, keep in mind that Grawl ...

Grawl may drop the following loot (besides gold and various weapons and items):

Grawl can be found in the colder areas of Tyria, i.e. in Ascalon as well as Southern Shiverpeaks.

For an alphabetic list of all Grawl, including bosses, see also: Category:Grawl 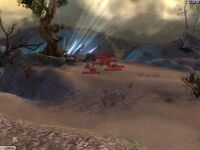 Sometimes (seemingly at random) players can witness strange things happening in Regent Valley (post-searing): Groups of Grawl Petitioners (monks and warriors) are making a procession towards King's Watch. Along the way they will run into groups of Grawl Heretics. The Heretics are hostile to the Petitioners as well as "normal" Grawl and Grawl Ulodytes, so they fight each other, and the Heretics are killed.

Eventually the Petitioners will gather at the Statue of Melandru near King's Watch, where a Grawl High Priest is waiting for them. They stand in concentric circles, with the High Priest in the center, the inner circle being monks, the outer circle being warriors.

This can only be explained as some kind of religious dispute among the Grawl. The fact that the High Priest and the Petitioners gather at the Statue of Melandru implies that the Grawl worship the Goddess of Nature. A small group (the Heretics) seem to be apostate to Melandru. It is unknown which god they worship instead, or if they are atheists. In any case, they seem to be killed in some kind of inquisitionary procession.

This event may or may not be connected with the quest, Regent Valley Defense.