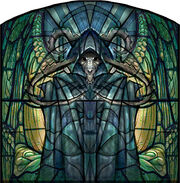 Mural in the Isle of the Dead. 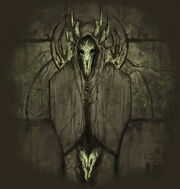 Mural in the Catacombs.

Mural in Gandara, the Moon Fortress. 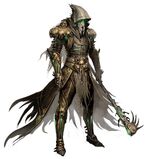 Dervish as Avatar of Grenth

Grenth is the god of death and ice. He is the lord of the Underworld and the patron god of Ritualists, Necromancers, and Hydromancers.

This inscription can be found on the Statue of Grenth:

Grenth is the darkest of the Gods, and depicts his dark image with great efficiency. Although his body is that of a human, he bears the skull of a fallen beast. Grenth is often seen with minions crawling for his acceptance, for his followers are usually fanatic in his teachings.

As revealed in The Necromancer's Path quest, Grenth promotes the casting off of illusions and 'the gilded trappings of sanctity', and encourages the perception of the world as it truly is. This fits with his role as judge to dead souls, and perhaps opposes him to Lyssa, goddess of deception.

It is suspected that Grenth may have replaced Abaddon as the god of water, however this is never outright stated, and the water portfolio may have been divided between several gods.