The Halloween 2006 event ran from Thursday, October 26 until Tuesday, October 31, 2006. It included the return of Halloween collectors, the redecoration of Lion's Arch and Kamadan, and perhaps more importantly, the return of Mad King Thorn who once again terrorized the populace with terrible jokes while at the same time rewarding them with special holiday treats. This event was similar to the original events of the Halloween 2005. 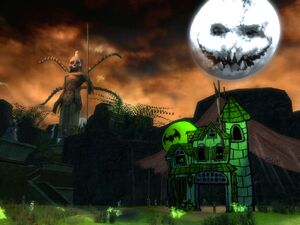 This is from the game update that made changes for the event:

Keep a lantern close by and the darkness at bay
For on this holiday night, they say

A spirit returns, pumpkin on head
Wicked deeds (and bad jokes) will abound
He’ll bluster and shout
Spread chaos about
’till a banishment for his mischief be found

Heed my tale, ye brave heroes
From lands north and south
Listen wherefore I say:
Bind your sanity close, lest you lose what you love most
When the monarch of madness appears.

During Halloween 2006 Decayed Orr Emblems were a booming market in Lions Arch, primarily due to their ease of farming. For the most part prices varied from 100g to 200g.

Transmogrifier Tonic is currently only available through Horsemen Garthim, Bishma, Vadir, and Nuher in Elona as well as from Mad King Thorn.

Horseman Garthim -- perhaps named after the beetle-like minions of the Skeksis in Dark Crystal.