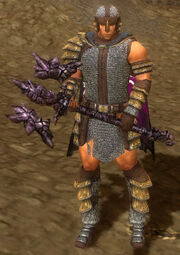 A Warrior wielding a Mursaat Hammer

A Hammer is a two handed weapon. Most hammers cause blunt damage, but the Colossal Pick causes piercing damage.

Dictionary Definition: "A hand tool that has a handle with a perpendicularly attached head of metal or other heavy rigid material, and is used for striking or pounding." - [[1]]."

The Warrior's Hammer Mastery attribute improves damage dealt by the hammer and related skills, and is often a requirement for this weapon type.

Hammer Attacks can only be performed when equipped with a hammer. For a list of hammer attacks, see Hammer Mastery skills.

Being two-handed weapons, hammers offer the highest damage range of all weapons available to Warriors, but at the cost of negating the benefit of a left hand item like a shield or focus item.

Hammers are slower than other Warrior weapons, and swing once every 1.75 seconds vs 1.33 for Axes and Swords.

The speciality of Hammers compared to other melee weapons is that hammers can be used to knock down a foe. Scroll down for details.

A Hammer can be equipped with a magic Hammer Haft (name prefix) and/or Hammer Grip (name suffix) to add extra bonuses to the weapon.

Furthermore a hammer may come with a number of non-salvagable magic modifiers.

The speciality of Hammers compared to other melee weapons is that hammers can be used to knock down a foe, which will interrupt the target's current action, whether it is an attack or casting a spell.

Tip: Warriors can use a Stonefist Insignia to increase the knock-down time by 1 second, but cannot exceed 3 seconds total.

Please consult our visual gallery or see them listed by campaign below.