The Hand Axe is a type of axe that deals Slashing damage and comes in two designs.

One type, available as loot throughout most of the Prophecies Campaign, has a long, curved head on one side, and a fang-like head on the other, and is identical in appearance to the Krytan Axe and White Reaver. This version is one of the largest axes in the game.

The second type can only be found in Cantha. The name hand axe can be taken literally. The wooden haft represents an arm which ends in a golden metal hand, with four fingers and one thumb, holding the rectangular head of the axe.

Applying dye to a Tyrian Hand Axe will alter the color of the handle and base (deep color change). The blade will remain unchanged. Its default color is red.

Dyeing the Canthan version colors the hand. Its default dye is yellow. 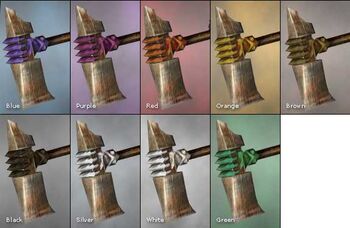