The Hero Battles arena was a place where players could lead their own squad of heroes against an opponent and their heroes. Each player is supported by three heroes that they must choose and customize before the battle starts.

Each match took place in a randomly chosen Hero Battles map. The goal is simple: you have to out-score your opponent. To do this, you can kill your foes for one point each, or hold as many shrines as possible, which will give points each time the morale bar is filled. The first squad that reaches twenty points wins the match. 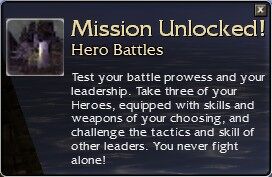 The following applies for this arena:

Note: Currently there is a ranking system similar to that of GvG that sets you up against an opponent based on your rating points.

Each map has a Central Shrine. The holding team receives additional progress towards a score point. After the Wednesday March 7, 2007 Update all shrines now contribute to the morale point but to a lesser extent than the center shrine. When a team has captured a Shrine at least once, both you and your enemy's progress to the next point is displayed; progress stops once all of your shrines are neutralized. When near the Central Shrine, each creature has the "To the Pain!" buff. While under this effect, you deal 10% more damage but healing is reduced by 10%. Apart from this, each map has different additional shrines, that give powerful bonuses in battle, if your squad controls it.

Each morale point adds 1/107th of a bar per second, so following times is what is needed to gain a Point.

Battles took place in any of the following arenas.
(Click the images for a better view)

The following Balthazar Faction rewards are given at the Hero Battles:

Since the December 20th, 2006 game update, players will also earn points toward the Commander title with each win in rated Hero Battles.