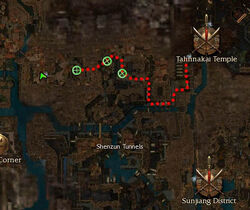 Location of refugees in Shenzun Tunnels

"Many Canthans are being displaced from the city and forced down into the Shenzun Tunnels because they have nowhere else to go. By the emperor's orders, we have completed work on a public shelter. Find those in need of a home and bring word that they now have someplace to go. I am sure the Emperor's Hand will reward you well."

Accept: "I will spread the word to refugees of the emporer's kindness."
Reject:"The word of the day is... no."

"The emperor truly cares for us! Praise his name!"

"I knew the emperor would take care of his people!"

"The emperor owes you a debt this day. You have served the people of Cantha well."

Imperial Guardsman Yang, who gives this quest, is located on the rooftops of Tahnnakai Temple (explorable) (see image above). You have to go a long way and fight against a number of the Jade Brotherhood groups along the way to see him. As such, you should bring someone with Ward Against Melee to protect against mobs of Jade Brotherhood Knights and someone with interrupts to prevent the Jade Brotherhood Mages from casting Dragon's Stomp. The quest itself, however, is very simple because the three refugees are all in the north of Shenzun Tunnels that is relatively safe and close to Tahnnakai Temple (outpost).